Prefer to travel on your own…

Strasbourg Airport and FLYINGGROUP are proud to unveil their newly established Joint Venture for the development of a new VIP Complex which acts as a Terminal for the Head of States Flights serving the Capital of the EU but as well as an FBO for the increasing Business Aviation traffic. 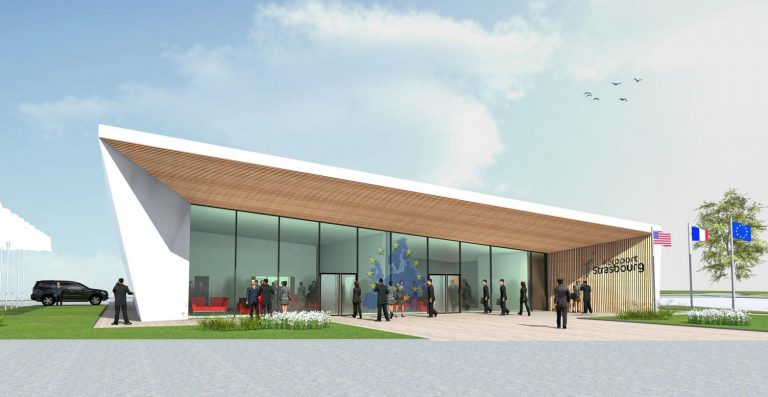 Additionally, two hangars in the size of 3000 m2 and 2000 m2 and a dedicated Fuel Station will be constructed in the new future.
The project will be run jointly as Strasbourg Executive SAS.
As an absolute highlight, Strasbourg Executive customers will be enjoying the Bugatti branded FBO, the brand well known for its artistic approach combined with superior technical innovations in the world of super sports cars.

The Alsace based luxury car manufacturer will deliver for their esteemed clients the most elegant furniture designed in spirit of italian-born industrial designer Ettore Bugatti.

It is self-speaking that the dedicated personnel are trained at highest levels to satisfy the requirements of VIP and Head-of-State services.
Strasbourg Executive new complimentary crew lounges are located airside in its new and dedicated terminal. The lounges will feature a relaxation area with the option of enjoying complimentary snacks and beverages, watching cable television on a large flat screen television or working at one of their computer stations that include free Wi-Fi, printer, scanner, and fax capabilities.

In addition to the crew lounges, Strasbourg Executive will have its 3’000 square meter hangars that can accommodate aircraft as large as a Boeing BBJ or multiple Bombardier Global 6000 or Falcon F8X – they will offer a welcoming alternative to crowded airports nearby. The hangar also features an additional 300 square meters of office space which makes it suitable to host an international MRO. The hangar is fully heated and under 24-hour security surveillance.
Understanding how important it is for customers to keep costs at an efficient level, Strasbourg Executive offers several services that allow for savings. As a result, Strasbourg Executive contracted World Fuel Services as an exclusive fuel service provider which will provide reliable fuel supply at cost-effective pricing. They will construct and operate a dedicated fuel farm that will grant short refuelling times and making the airport a desired destination for international fuel stops. Additionally, Strasbourg Executive offers customized parking options that can reduce costs and complimentary bookings with the Strasbourg Executive discounted rates at the Capitals top hotels.
Strasbourg Airport CEO Thomas Dubus states « This partnership with FLYINGGROUP in Strasbourg Executive to run a new hangar and this new FBO with its superior lounges, designed and decorated by the most iconic local luxury brands will ensure that all our business aviation customers will receive the best and seamless experience they deserve.

The accuracy of the project will be enhanced by the additional infrastructures delivered in conjunction by the airport: New aprons dedicated to business aviation, dedicated fuel farm and a new Head of State Terminal, able to welcome the guests of the European Capital »

FLYINGGROUP was founded by Bernard van Milders in 1995. It started as a management company for fractional ownership of business jets, extended its services to air-charter brokerage and quickly evolved into one of the largest air-charter brokers in the Benelux. By the end of 1997, the company also offered aircraft management services, handling services at its FBO and Part 145 maintenance in Antwerp, Belgium.
Currently FLYINGGROUP operates and maintains more than 40 aircraft world-wide. Its headquarter is in Antwerp, but the group has extended throughout the years to Luxembourg, France, the Netherlands and lately Malta and the Middle East. FLYINGGROUP conducts a complex operation, with high performance aircraft, demanding customers and challenging missions. In addition, it complies with complex, detailed and ever-changing rules and regulations and faces a very competitive market.

Located 12km form Strasbourg, the European Capital, the Strasbourg Airport is an international platform handling each year nearly 1.3 million passengers. The airport hosts 15 airlines serving more than 50 domestic and international destinations.
Occupying a surface of more than 30 000 square meters, the Strasbourg Airport consists of a terminal for commercial flights as well as a terminal dedicated to freight and a terminal for business aviation, the latter being in full swing.
The airport also has a business park, Skyparc, with a 45ha land reserve.
The quality of service is the core of the airport’s concerns, which in January 2017 created its own handling company: Strasbourg Handling, which employs 40 people.

This website uses cookies to improve your experience while you navigate through the website. Out of these, the cookies that are categorized as necessary are stored on your browser as they are essential for the working of basic functionalities of the website. We also use third-party cookies that help us analyze and understand how you use this website. These cookies will be stored in your browser only with your consent. You also have the option to opt-out of these cookies. But opting out of some of these cookies may affect your browsing experience.
Necessary Always Enabled

Any cookies that may not be particularly necessary for the website to function and is used specifically to collect user personal data via analytics, ads, other embedded contents are termed as non-necessary cookies. It is mandatory to procure user consent prior to running these cookies on your website.